Our traditional line of bullets feature exposed lead tips for controlled expansion and hard-hitting terminal performance. Most have our pioneering secant ogive design — one of the most ballistically efficient profiles ever developed (see diagram to right). Most feature our exclusive InterLock® design — a raised ring inside the jacket that is embedded in the bullet’s core that keeps the core and jacket locked together during expansion to retain mass and energy.

Strategically weaken the upper section of the jacket, ensuring consistent, controlled expansion, even at long range.

Jacket thickness is precisely controlled for expansion at all velocities.

Provides accurate and consistent crimping and also works with InterLock® ring to ensure the core and jacket remain locked during expansion.

The raised InterLock® ring is embedded in the bullet’s core, ensuring the core and jacket are locked in one piece during expansion to retain mass and energy. 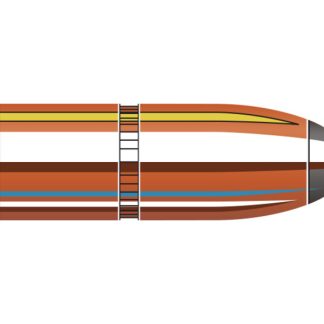 You're viewing: Hornady 32 Cal (.321) 170gr InterLock® FP $33.49
Add to cart
Create a new list
We use cookies to customize content and to analyze traffic. We also offer to analytics services (Google Analytics) information on how you use our site. They can combine them with other information you provide or collected from using their services. If you choose to continue using our website, you consent to the use of our cookies.